Other Every restart I loose

Every time we have a restart I loose stuff whether on me or from my village.
The latest restart I lost all my animals & I have 4 worker when I should only have 2. for some reason they doubled.
I had 2 bats, 4 polar bears(that RTFrog gave me), 4 mooshroom(cow) 4 cyan coloured sheep, 4 pigs, 4 chicken, 8 turtles, 12 parrots in diff' colours all over the village. I also had a variety of fish(about 7 fish) in turtle cove...

Earlier I lost 4 grappling hooks & 3 stacks of diamond blocks, 2 stacks of soul gems, 3 stacks of coal blocks.
I was able to crush tiered items but the essence disappeared so I lost 15 legendary essence but now I can't crush items, so it flip flopped back & forth....I paid into princess so I could crush items, then they made a change to be a Lv 75 blacksmith then it changed back to where I could crush stuff, then it changed again & that's how I lost the essence .
& ealier, earlier I lost 15 lucky bamboo I had on me before a reset....

I'm scare to make a fox pen that I may loose that...but I haven't.

Also Ive been trying to get the prospector title per say & for some reason I can't get that either. Another admin saw the issue & said they'd make a ticket to fix it for me but idk if that happened.
Last edited: Jul 1, 2019
D

Heya, I've refunded you the missing items and will look into the disappearance of your animals and the missing miner title, leaving this open for now.
J

x7Howl7x said:
Heya, I've refunded you the missing items and will look into the disappearance of your animals and the missing miner title, leaving this open for now.
Click to expand...

Next time warn an old lady before you pop stuff on the items bar.....scared the crap outa me!!!! lol
J

IDK if this worked itself out or what but I just logged on & I have 2 workers like I'm supposed....but idk if that'll change as a I play these next few hours.....I'll keep an eye on it.
J

I was wondering where we were with the investigation into why all my pets went poof????
J

Sorry for the delay! The tps had been very bad lately, but Soap fixed it will look into the pets soon and as for the workers. 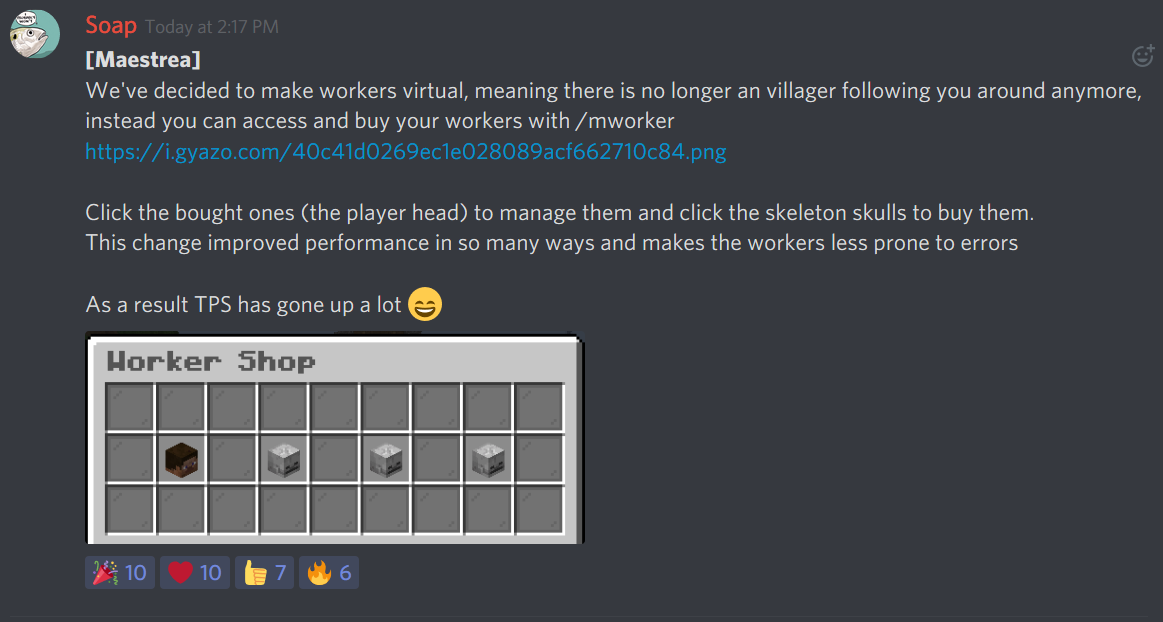 Awww I thought they looked perfect 'showing' in my village even if they stood still.....but I get it.....I'll have to play around with it & figure out how to pay them....But also don't forget to look into why I can't add prospector or(the farming) title to my name....even thou I want the miner title.
J

I think they may be de-spawning due to the amount of mobs allowed per chunk. I'll spawn all your pets back for you, and rename the named ones and we can test and see if this is the issue.
J

But I wasn't having a problem until the reset of the upgrade...I did have an issue when I 1st made my house but an admin helped me at that time to work thru it & no issues since, until now.....so why now all of a sudden am I having issues with pets?? They were spanned out so that they wouldn't conflict with each other & the chunk issues in the village....So I don't feel it was a chunk issue...
J

I was wondering when you'd have time to birth my pets back???
J

So after the advice of naming the animals, 5 dogs still despawned…& I've yet to get my animals birthed from the start of this thread...as was promised.

Mobs will despawn if there are too many in a single chunk. It's either that, or someone is killing them.
Hey! That's mildly adequate!

All my animals were fine before all the restarts happened...it was only after the constant restarting that my animals disappeared.....when you have 4 polar bears to a habitat you can't have 5, I had 4 mooshroom cows...they all disappeared. I have 2 bats in a habitat they disappeared & they weren't anywhere near any other animals in my village....I had parrots spread out thru my village....2 were far away enough that there wasn't any other parrots around...my turtle cove was fine with 6 turtles cause it was large enough but they disappeared along with my fish....all the sheep & pigs & I lost 2 of my 4 cows & 2 of my 4 donkeys...all these animals where fine before the restarting …..all the dogs I had half are gone...I was told to name them so they wouldn't disappear. I then lost 4 more dogs after naming them....this has nothing to do with having too many animals in a small space. I'm not that stupid....I had my wild animals spread out so they couldn't interact with each other ….the "domestic" animals(cows, sheep, pigs, donkeys, ect were fine a large pen...UNTIL THE RESTART.....what part of all this don't you understand. If it was a matter of too many animals then they would have despawned long before the restart. & that wasn't the case.
J

Basically what I see here is the lack of respect towards a player when admin want to put the blame on the player & own up to the issue that created the problem. I joined the sever rite after the reset last year made my farm w animals didn't have any issues until the update & then we started having issues w all the resets. So if I was having issue long before we had the most recent restart problems why wait now? Why didn't I make a ticket or address the issue long before...because I wasn't having any issue then. They started when we had all those restart problems...& now admin doesn't want to fix the missing animals.
D

It was explained to you that mobs de-spawn, we're constantly upgrading and changing and refining plugins etc to improve performance and combat lag, so, it is indeed very possible a change or refinement caused them to de-spawn.

As for the "doesn't want to fix the missing animals" I waited one hour+ each day for over a week for you to be online at the same time as me to replace your pets, sometimes even being on late in an attempt to resolve your issue to your exact liking, however, due to the fact that you do not use discord, thus being the primary form of staff to player interaction outside the actual server, it makes things hard, this case is unique within itself as all of the animals would need to be spawned in precise locations around your town to attempt to circumvent the mob limiting de-spawn mechanic that is more than likely the culprit here and will more or less de-spawn the animals again due to them moving into nearby already inhabited chunks or something else to that degree.

Simply giving you the spawn eggs would be inappropriate as they hold a lot of economical value when used with spawners.

I became quite busy recently with real life responsibility,(I have a full time job) staff are human as well and we only have limited time to dedicate to the server, some more than others, I apologize for the delay however, the only lack of respect here is from you, so please be patient, I'm testing and attempting to recreate the issue before returning the animals and attempting, as it would solve nothing to return them only to have them all vanish again a few days later.

Thread is close for now, issue will be resolved within the next few days, please be patient.