A player got permabanned on the server this morning for being annoying in chat and talking about communism. While this does go against the server rules, and I agree with dealing with him, a permaban should definitely NOT be the first response to this.

No matter what you say in chat, except for bots or genuine intent of harm, first offenses should not be enforced by permanent bans. A simple temporary mute and a warning might have been enough for this person to stop meme-ing in chat. If staff jump straight to permabans for just a chat offense, the policy on enforcement should be rethought.

Yes, they could just repeal on the forums, but would a new player really do that? We should give people more than one chance to stop talking about things we don't like.

Wait so if you like a political figure and have them as a name/skin you can get permabanned now? I gotta agree that doesn’t seem very fair

While I cannot speak for moderation staff. Basically it would incite other people to start wearing the skins and names of other Political Figures like Donald Trump or that person we don't speak of from WWII. Because if one player does it, who's to say another player won't because the first person did it and didn't get in trouble? And no they arn't banning them because they LIKE the figure, they can have their own opinion but intentionally using their name in chat and their skin may incite political debate and as you know political debate is not allowed on our server because it causes flame wars.

Once again I am NOT speaking on behalf of the moderation staff. I am speaking from my own opinion.

Edit: Also if you think this server's moderation is unfair, my old server used to take people who came on the server like that. Teleport them in a box and let the server spawn kill them by dunking em in lava for hours on end until the admins got bored of it and permabanned them after cussing them out in chat.
Last edited: Aug 14, 2018
How to describe all Sonic Mania mini-bosses in one sentence:
"Reversible wrecking ball, Ice Cap Act 1 upside down, garbage, oops I hurt my saw-hand, well you said you wanted them to bring back Firefly, Eggman is immune to depth charges, Dune, the guy who keeps Oil Ocean from exploding, eat some delicious lava, demoting the least impressive final boss, and HAL 9000 returns." - abraveastronaut

Pretty sure most players with an offensive name/skin or both that just join to troll get perma banned.

If they regret what they did they be free to change skin and name appologize in a unban appeal. And(most likely) be able to play again ^-^
Theres nothing better then Unicorns & Dinosaurs
or is there?

Hello there! Thank you for expressing concern with our rules on Maestrea -- especially in the proper forum.

I spoke with LilyBobJoe and we discussed that his ban for Inappropriate Name/Skin was performed before his looking at the player's chat/command logs.

Inappropriate Name/Skin bans:
Usually these skins/names are used with the intent to troll, cause a disruptive/inappropriate discussion, and more. When they change their name and skin to something more appropriate, they will be unbanned after appealing and proving they did so. 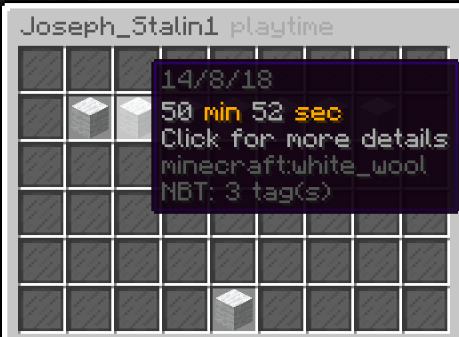 The player in questioned played for less than 1 hour on Maestrea. He did not join a job, and the only thing he really did was mine stone. This was taken from his commandhistory:

This is taken from chat as soon as he joined:

His presence on the server served as an unfortunate example that we should not be allowing players who even have a name that closely relates to such a horrible political figure. This is also his chat: We at Maestrea strive to make the server a comfortable place for all to join and play. It's a minecraft server, a place for people to forget about the real world and be happy.

Who is Joseph Stalin? What did he do?

"Stalin ruled by terror and with a totalitarian grip in order to eliminate anyone who might oppose him. He expanded the powers of the secret police, encouraged citizens to spy on one another and had millions of people killed or sent to the Gulag system of forced labor camps. During the second half of the 1930s, Stalin instituted the Great Purge, a series of campaigns designed to rid the Communist Party, the military and other parts of Soviet society from those he considered a threat."
"By some estimates, he was responsible for the deaths of 20 million people during his brutal rule."

Thank you all for all the clarification. I see how it is justified now. Maestrea is a great place, and I'm glad we don't tolerate trolls, but we at least give them a second chance. Maybe we could have a notification upon ban that gives instructions for appeals. (Unless we already have that, I've never been banned)

Lithrus said:
Thank you all for all the clarification. I see how it is justified now. Maestrea is a great place, and I'm glad we don't tolerate trolls, but we at least give them a second chance. Maybe we could have a notification upon ban that gives instructions for appeals. (Unless we already have that, I've never been banned)
Click to expand...
We do It even provides a nice little click-able link to our forums!
|Helper: July 6, 2017-August 24, 2017|Mod: August 24, 2017-November 26, 2017|Overseer: November 26, 2017 - March 31, 2018|Admin: March 31, 2018-August 18, 2018|
You must log in or register to reply here.
Share: Facebook Twitter Google+ Reddit Pinterest Tumblr WhatsApp Email Link
Top Bottom