Upon entering RoE you'll be met with Enderius who once clicked will begin his dialogue also starting the raid. After his dialogue is over you'll be teleport to the start point of the raid. You'll have to option when choosing which path you want to go. Left side is longer but there's less ads that attack you, right side however is faster but there's a lot more ads that will attack you.

First Boss Fight: Rakul.​
Once you make it to the first boss fight Enderius will be waiting outside of the arena, click him to begin dialogue, once the dialog is finished a creeper will spawn that once clicked starts the fight.

When you enter the arena Rakul will begin his dialogue, once finished the fight will start.​
First Stage.

Ender Slam is an ability Rakul will cast at random, he launches himself in the air and upon hitting the ground releases AoE damage, the further you move away from him as he hits the ground the more damage you'll take, so make sure you're close to him whenever he uses it. Ender Charge is an ability where he charges at you dealing damage, he will use this ability at random. So watch out for it.

After you take 15% health from him he'll summon towers on either side of the arena. They have color'd heads, starting with Green, they'll go through different colors, once it hits black they will heal Rakul, 1 person much right click the heads before they do this to stop them from healing him. Each time you click a tower he'll gain 1 rage called Ender Lord's Rage, once this hits 10 he'll enrage instantly killing anyone in his path. Make sure you're away from him when he casts this.

The head colors go as such. Green > Orange> Red > Black. Must be healed on Red.​
Tower Szu: Szu heals Rakul for 10% of his max health if you don't right click it before it reaches black color, each time you click Szu the player that clicked him will recieve damage. The damage becomes greater the lower charged the tower is. Tower Zar: Zar heald Rakul for 6% of his max health if you don't right click it before it reaches black color, each time you click Zar the player that clicked him will recieve damage. The damage becomes greater the lower charged the tower is. Ender Lord's Rage: This rage has 10 levels, each time you click a tower this rage goes up by one, so keep track of what rage he is on, once he's at 9 left the tank tell you when to active his rage so he can move away from him, all other players should move to the tower side of the arena so he wont get you.

When Rakul reaches 10% health left he'll become immune and the towers will turn into Golems that you must kill before you can kill Rakul. Rakul will now start gaining Rage on his own so pay attention to what Rage he is on, once he reaches 10 run away from him as he will instantly kill you.

Golem Zar: Zar is best killed first. He casts Ender Slam works the same as Rakul so be close to him when he casts it. Golem Szu: Szu is best kept into a corner and left second to kill. He casts Ender Blast works the same as Rakul so stay out of the particles as they do damage. Once Zar & Szu are killed you can proceed to kill Rakul. Everyone must focus dps on Rakul at this point, he will still gradually gain rage so if he gets close to 10 move away.

After Rakul is defeated follow the path proceeding to the next boss fight. There will be ads to deal with as you move along.​
Thanks to Tank for creating RoE

Due to character limit i'll be covering Catalyst and Fzarian in the comment section.
Thanks for reading -Takanderfh
​

After navigating through the raid you'll get to the second boss arena. Enderius will be waiting outside, click him to begin his dialogue. At this point you should repair your gear if you haven't already. Once dialogue has concluded a creeper will spawn that after clicked will begin the Catalyst boss fight. 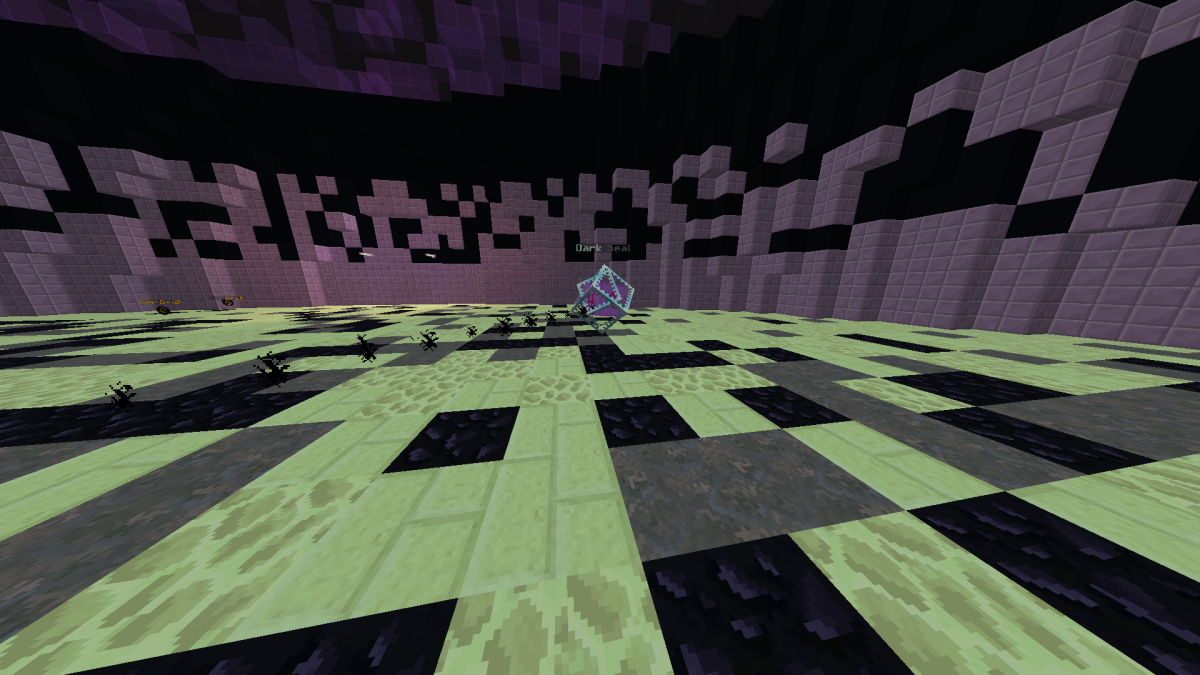 Section 2: Catalyst Devourer
Catalyst Devourer are minions that spawn from Dark Seals. When they spawn there will be an explosion that does damage and enflicts Confusion onto you. They also give you slowness 3. Dark Seals also heal Catalyst overtime so they should be dealt with fast. Section 3: Catalyst ads
During the fight Catalyst will spawn multiple minions to his aid, such as 2 Enderman that give you levitation when hit, 2 Zombies, 2 Zombie babies & 2 Ocelots. It's best to kill these minions before you carry on attacking Catalyst. Section 5: Shattered Crush
Shattered Crush is an attack Catalyst will use at random. This attack will launch you into the air dealing significant damage, best to have healing on you for this attack.

Section 6: Dark Rupture
Dark Rupture is an attack Catalyst will use at random. This attack is a burst damage attack that focuses on the line of sight the tank is in, meaning it'll fire the beam in the direction of the Tank. Whoever is in that line of fire will be hit with it also, so watch out for it.

Section 7: Devour
Devour is an attack Catalyst will use at random. This attack will allow Catalyst to latch onto the player that's tanking, dealing damage and recovering health. Devour also inflicts Confusion and Silence.

After dealing with both sets of Dark Seals, Catalystic Tamer Malrn will spawn you must kill him before you carry on fighting Catalyst, you are given 4 minutes to defeat Malrn. Otherwise the fight will be over. 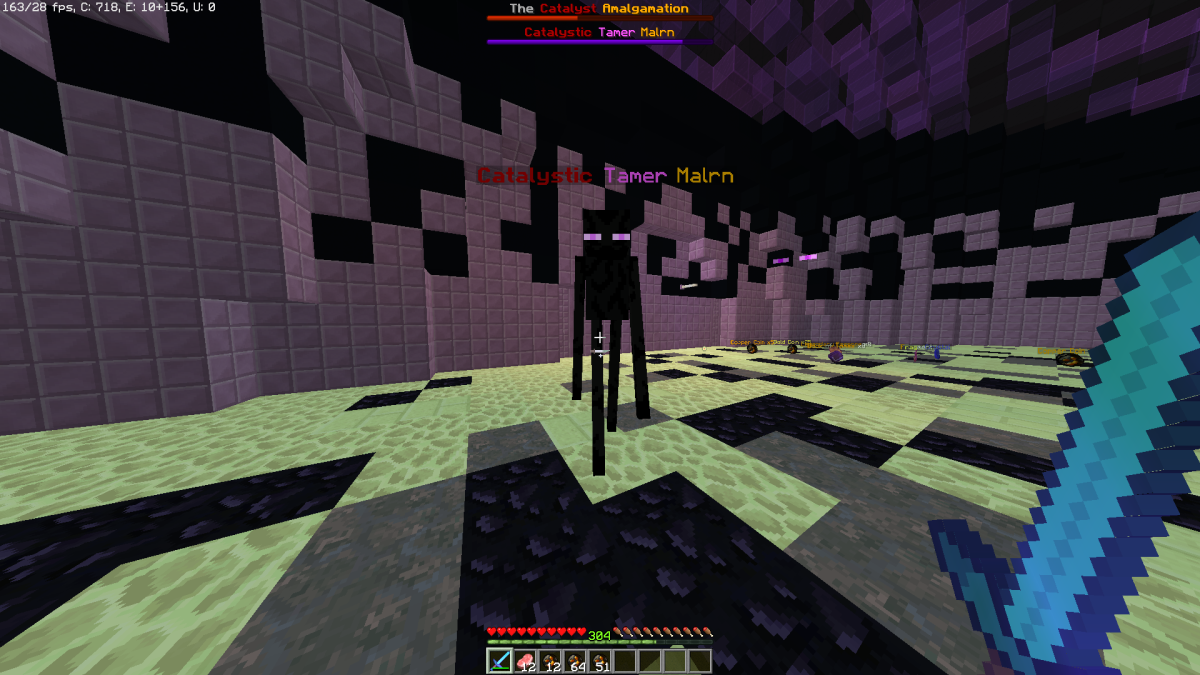 Once Malrn has been defeated the arena will become smaller. There will be a particle ring in the centre of the arena, you must stay within the circle as outside of it will damage you, he'll spawn his minions during the stage. Use AoE attacks to dispatch them quickly. Once done keep damaging Catalyst and eventually he'll be defeated.

I'll cover Fzarian sometime next week, sorry for doing this in parts and taking a bit to complete i've been rather busy irl.
Thanks for reading part 2 -Takanderfh

If I have made any mistakes or if any of the information is wrong please dm me on discord and let me know what is wrong.

You'll be met with Void Dragon, he has a starting animation/Dialogue so you must wait before you can begin the fight.
When the fight begins you should only use bows, if you get too close you'll be damaged and knocked back while also inflicted with confusion and silence. So keep your distance.​ Section 1: Void Breath
He'll cast Void Breath over the course of the fight. You should avoid this at all cost as it cause damage while standing in the particles, Void Breath will be cast in a straight line that spreads out into a triangle shape towards whoever he's focusing on. Section 2: Void Dash
He'll fly into the air and dash towards whoever he's focused on, avoiding this ability is best. If you're hit he'll damage you with the ability while also inflicting the natural confusin/silence because you're close to him.

Section 3: Call of the Enderman
Call of the Enderman is pretty straight forward he'll cast a horde of Enderman that will swarm you, they do not do much damage and their health is rather low so these shouldn't cause too many problems. It is still best to kill all of them to reduce damage even if the damage is minor.

Section 4: Void Lightning
The ability is a must to avoid, if you're hit with this is causes significant damage and can possible kill you in 1 hit. When you see this ability being cast run in a straight line away from the dragon, make sure not to run behind someone as void lightning follows you and if you're behind someone or stand still you'll be hit by it.

After defeating the Void dragon you'll begin the second fight Fzarian. Upon starting the fight you'll notice there's a huge gaint that spawns, you must defeat this to expose the core. After defeating the gaint his core will spawn, kill the core. You must do this 3 times. Section 1: Void Crush
Void Crush is an ability he'll cast at random, this when cast will teleport everyone too him. You must run away from him when he casts this as it'll cause significant damage if you're hit by it.

Section 2: Void Bombardment
When he casts this it'll be directed to whoever he is focused on, if he's focused on you run left or right and keep running or use a dash item to get away from the attack.

During this Phase Fzarian will spawn minions to aid him, these include Enderman and Spiders with a lot of health, so make sure to kill all of them whenever he does spawn them. Section 1: Void Tear
Void Tear works like Ender Blast from Rakul. Difference is Void tear shoots 4 particle line in 4 directions. This 4 directions go as such. Front, left, right & behind from where he's standing when cast. Section 2: Void Blast
Void Blast is an attack that'll damage everyone close to him, so if you're dpsing him and you see him use this attack run away from him. If you do get hit by it it'll cause damage and give you wither and it will silence you.​
Section 3: Void Flakker
This is a directional attack, meaning this attack will only be focused on whoever is tanking and has Fzarians focus. If you're tanking and he casts this run away or use a dash item to get away.

Section 4: Void Decimation
Void Decimation is an instant kill ability that he'll cast when you've taken a significant amount of health from him. When he casts this you must find Enderius and stand next to him to survive, if you're out of the circle that is around Enderius you will die painfully and instantly. He'll also summon minions when he casts this ability, best to kill them as soon as possible. You must do Phase 1 and Phase 2 a maximum of 3 times before the fight is over. Once you gotten to the last Core near the end Enderius will teleport you all on top of one of the spires and there will be a bit of Dialogue, once the Dialogue is concluded you'll be teleported back to the bottom and you can end the fight. Once you kill the last Core the raid is over and completed.

This will conclude the tutorial. Thanks for reading - Takanderfh

Massive thank you to TankDest22 for creating this raid!