Hello everybody! You're overdue for a weekly update, so here it is!
There's lots of updates to come from the past month so strap yourselves in!

The Christmas star item is now compatible with Relic Sockets

New Towns can now use spaces in their town board

Players below Traveller rank can no longer make towns

Cook's Cookie is now working! Use /olditems to fix if you have existing ones

All tiered items are crushable again!

Some /ccraft formatting issues are fixed

Issues with trader items are fixed

Frost Walker is no longer working in spawn

The Required participation breaks for the Ultimate Block is now 12.5k and the reward for this is now a Mythic Key

Back buttons are now in /ccraft

You can no longer transfer money to Dungeons

The starter kit was nerfed. Also the starter gear is now custom named
Here's what it looks like now: 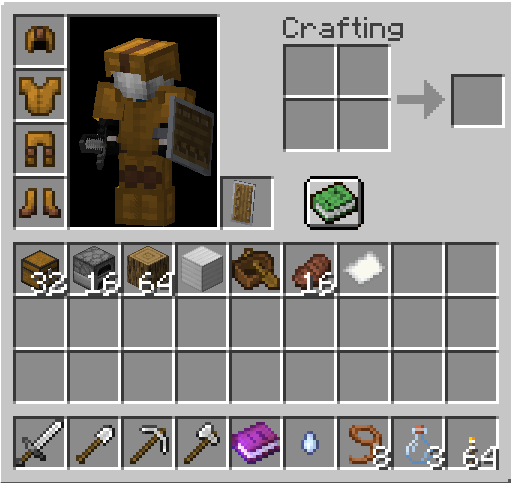 The Shady Trader has once more come and gone and come again. Check out his wares before he leaves!

End and other resource worlds have been reset!

Potions no longer vanish when switching to Resource

LunaAki has been promoted to Junior Admin!

ElliotJD has been promoted to Junior Admin!

FracturedDream has been promoted to Overseer!

SquareKnees_ has been promoted to Mod!

Page 3 of the block shop now has all 16 wool colors.

Sheep will no longer stack, so they can be sheared efficiently.

Added rewards for 186 votes:
One Zeppelin Key and an $8 store voucher.

Added the custom achievements from Towny.

Fixed /up for Angelic+.

Created a new item called "Condensed Cloud" It's 64 Cloud fragments condensed into a single item like dungeon coins, can craft them by condensing cloud frags in the Fragment Trader.

Should be able to now Auction the right amount of auctions per donor rank.

Added the fishing event to Skyblock The crusher is working again.

Fixed a rare issue where players would be put start gliding when wearing Elytras and using elevators.

The reward chest at the end of the hidden Puzzle now has a reward in it.

Increased the chance to get Chester when a Supply Crate you open rolls a mimic. (4% -> 6%)

Gigamachina now has a higher chance to drop Orbs of Empowerment. (4% -> 8%)

Rakul, Catalyst, and Fzarian now have higher chances to drop Orbs of Empowerment.

Gigamachina now uses a new attack called [Rock Crusher] which sends shockwaves out at random enemies nearby. Inflicts high damage and gives Weakness IV for 10 seconds if you are hit by it.

Gigamachina will now target up to 4 players with [Stun Missiles] according to his current health.

Slowed down the charge rate of Gigamachina's [Hyperdrill] ultimate attack.

Added Gigamachina Teleport Beacon to Kira Valley's trader. Teleports you to Gigamachina's Digsite however it has a one hour cooldown and will only teleport the user. It costs 9,500 coins per so use wisely.

Enderius will now give Levitation at the start of his dialogue upon teleporting in to reduce the risk of falling into the void before the battle starts due to a previous battle.

Increased min despawn range to 42 meters instead of 32 meters.
Should help fix some despawning problems. Will revert back if it ends up causing more problems.

Fixed Merric being unable to be fought. His boss fight will now start automatically upon interacting with the NPC.

Fixed Aspect of Varson, Ender Golems Szu and Zar, Warlord Zendecahar, and Void Dragon not doing anything and just sitting there taking the slaps...

Fixed being able to spam challenge master to spawn multiple bosses at the same time.

Fixed different people being able to spawn the same boss at the same time.

Fixed condense! However, it's in a new Command. (/condensecoins)

Fixed the Bandages still not being consumed when used.

Fixed it so when opening a crate, it will no longer send two different received messages, you will only get the [mCrate] one.

Fixed Dungeon Trader in Kira Valley not being able to be bought from.

Fixed Kira Teleport Beacons tping you to the flatlands if used in different worlds.

Fixed Supply Crates that spawn in Kira Valley glitching out. They will now properly despawn after 2 minutes when spawned.

Fixed the Dungeon Trader in Kira Valley so they now properly sell the upgraded rations.

Fixed players being able to break blocks in D7.

Fixed Chester's minions and summoned minions by mystical pickaxe not having heads.

Fixed non-warlocks being able to use Kira Teleport Beacons

Fixed a rare instance where incorrect Copper Coins would drop. You can fix existing ones with /olditems

Fixed Heart of War being incompatible in Apocalyptic crafting. Additions:
+ Added Kira Valley/Kira Valley Village! This entire brand new area/hub can be unlocked upon reaching Warlock rank! Once you are that rank go to The Gate and go to the warp NPC that is there and you will be teleported to the enterance to Kira Valley. You will be able to access Dungeon 7, Kira Valley Village and the World Boss from this mini-open world area (With more areas to be added in the future!). Explore and fight mobs! You never know what you may find!
+ Added Dungeon 7, Varson Labs. Deep within Kira Valley lies Varson Labs. One of many Mob Alliance installations that researches and produces new redstone technologies for Varson and his growing army. What deadly secrets will you find within? Or will you perish by the hands of the powerful Insanus who's men fiercly guard Varson Labs? Only one way to find out! This Dungeon automatically unlocks at Warlock rank alongside Kira Valley. I highly suggest you train up and get familar with Kira Valley enemies before attempting this Dungeon as it's much harder than previous ones!
+ Added World Boss Gigamachina! After Varson's defeat in the Spawn Refuge during the Invasion. Varson has begun to construct Kira Fortress within Kira Valley. The Fortress is in it's infancy as barely any supplies are moved there and land is still being carved out by the monsterous demolition mech known as Gigamachina! Stop Gigamachina before the Mob Alliance have a chance to build Kira Fortress and establish a permanent foothold in Kira Valley! The World Boss respawns once every 3 hours when it's defeated or despawns.

+ Added Empowerment! Currently only 3 Raid Tiers are available! Want to make your Raid Tiers even stronger? Try empowering them. You can empower Raid Tiers once you unlock Kira Valley from the Custom Crafter there. Gather materials from Kira Valley to empower your Raid Tiers to make them stronger to take on the much more deadlier challenges that await you...

Crafting Changes:
+ Coven Witch's token no longer requires an Unpowered Challenge Token. It now requires a Coven Sigil as a replacement. This item is obtained from Coven Inquisitors in Kira Valley.
+ Mythical Essence is no longer craftable. It is dropped by Enderian Challengers in Kira Valley.

Changes:
+ Stun now effectively turns off the mob's AI for the duration of it's effect making stun seem alot more realistic and much more useful.
+ Many Bosses/Technical mobs are now immune to stun and will no longer be stunned when attacked with a skill that does stun.
+ Suspicious Loot Caches will now despawn after 2 minutes if they haven't been opened.
+ Spawn and Kira random wandering NPCs are now killable and despawn after 5 minutes when spawned to effectively kill the random stacking issue.
+ Added many sound effects to many areas of dungeons to make up for the lack of sound effects and make the game feel more alive.
+ Coven Witch, RoE, and Enderius tokens have been moved to Kira Valley's Dungeon Trader.

Item Balancing Changes:
+ Bandages now refill your health very rapidly upon using them. Rather than instantly. Also they have new sound effects.
+ Greatly increased Nightmare's [Haunting Visages] damage. (150 -> 375)
+ Book of Weakness no longer reduces attacking speed. (You should probably get a new copy of it)
+ All staffs that use healing abilities will no longer be silenced. Note that if they summon minions. Only the skill that summons that minion will be silenced.
+ All staffs with healing abilities now have a longer range. (+8 meters)
+ Book of Weakness no longer reduces attacking speed.
+ Heaven's Demise no longer has Punch III.
+ Heaven's Demise now has a shorter cooldown. (5 minutes -> 3 minutes)
- [Crushed Hopes] will no longer affect many bosses.
- Varson's Lament will now only give Slowness and Weakness I to enemies who attack you.

Balancing Changes:
+ Increased the damage of Gigamachina's [Stun Missile]. (120 -> 170)
+ Gigamachina's missiles shot while the Drop Ships are alive will now travel faster and it will now fire them at a little bit faster rate.
+ Shielding Drop Ships now gain the ability to fire missiles randomly as well but do so at a much slower rate.
+ Aspect of Varson will now have 1 less minion summoning wave during Phase I.
+ Aspect of Varson will no longer retreat to his throne after summoning enemies and become invincible. However, he will not use any special attacks for 15 seconds after the wave of enemies have been spawned and his attack cycle will reset. If you deal enough damage to pass a health gate while his cycle hasn't started yet he will skip over the minion summoning. Additionally he will gain a Fiery Armor effect for those 15 seconds which like regulard Firey Armor gives Resistance II and deals damage. The damage of Firey Armor will increase by 33% during this state.

Changes:
+ Shielding Drop Ships will now have their own boss health bars when they appear.

Item Balancing Changes:
+ Voidplate's [Void Control] will now activate on attack rather than taking damage. Also it is no longer considered a passive. (Kind of annoying when a mob slaps you and your powerful attack goes off isn't it?)
- The Breacher's knockback will no longer apply in Invasions.

Balancing Changes:
+ Gigamachina's [Stun Missile] attack will now target 3 enemies when it is at 40% health or lower.
+ Gigamachina's Drop Ships will now fire missiles at the closest target to them rather than randomly. But have a slower fire rate as a result of this change.

Thanks for the weekly update guys! Can't wait to read it
owo