In the Jungle, the Mighty Jungle...

Prince now has access to /me on a 10 minute cooldown. King is able to use color codes in /me

Changed how /kit works. It now opens up a menu with the kits you have unlocked where you can view a preview of the kit and the time remaining (you can still use /kit <kit name> if you prefer)

Fixed Light Weight enchant being weird, it'll now only work in main hand and properly decrease the durability of your item.

Nerfed Eldritch Armor due to it being stupidly OP in comparison to everything else on the server.

Moved combining scrolls to /ccraft and it's also free

You can now tag players in-game to get their attention! Writing a @ before their name (tab completes) will send them a notification in the form of an egg pop

Added Biome Changing seeds Aka Magical seeds to the crystal merchant. These special seeds will open a nice little menu when right clicked allowing you to change the biome of the chunk you're standing in and in turn consuming the seeds

Fixed Prestige 1 Legend being unable to place their condense chest

Guard and above can now make [command] signs, they run commands for the player right clicking it, ex: (Any abuse or scams involving this will get you in trouble) Suggested by @oVexlz here: Bind commands to signs as title perk

Auctions will now have an anti-snipe range between 1 to 4, rather than being exactly 2 every time. This will make every auction more unique, unpredictable and prevent auctions from ultimately being sniped every time after the regular 2 snipes.

You can now select the Skypack Titles without always having to change to Skyblock to wear them.

Added "Received x item!" messages to all rewards in Skyblock crates, rather than it just saying "You opened a x Crate!

Enderius and D5 have had some reworks to the various mobs. Check out Discord for the full update

[Quests] Fixed D1 Mobs being genetically engineered to drop infected samples all over the place when they die. They will now only drop them during the Dungeon 1 Quest.

Vortex and Repulse have been disabled due to issues caused by them in Challenge Bosses.

Fixed people being able to fly at /warp pvparena

Fixed keepInventory being on in dungeons 1, 2 and 3 for some reason

Buffed Sealed Challenge Tokens. You're now slightly less likely to get a Storyteller Token, but a bit more likely to get everything else.

Added Dungeon 6 Mobs and all Challenge Bosses to Hunter.
All values are subject to change, as the current values are serving as a live beta test. If you find anything exploitable or OP with the payouts, please report it so it can be fairly tweaked.

[Quests] The Chronicler can now let you view your past MDT adventures if you finished his Storyteller side quest. This feature also shows you where you made a distinctive choice by marking what point you got while you read the text. 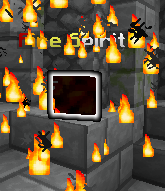 You are now required to kill the Storm Crystal before progressing in Dungeon 4. Killing Storm Crystal unlocks the diamond elevator (that will stay open for 25 seconds), that allows the dungeon to progress.

Completely readjusted the entire spawning layout of all the mobs in D4, making the dungeon somewhat easier.

Added a new mob to Dungeon 4, the Wind Sentinel. Found near Storm Crystal's and Tempest's arenas. Wind Sentinel is a floating ball that has a shield. You must break it's shield before being able to kill it (broken shield is shown by having an unenchanted head) 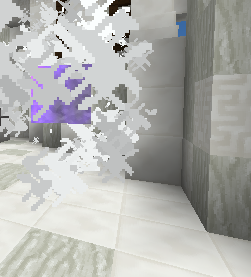 Added a new item to the Dungeons Trader for 8192 coins - Berserker Serum. Gain Strength 10 for 15 seconds. After it wears off, you will take 2 hearts of damage and gain Weakness 3 for 10 seconds. (1 hour cooldown) 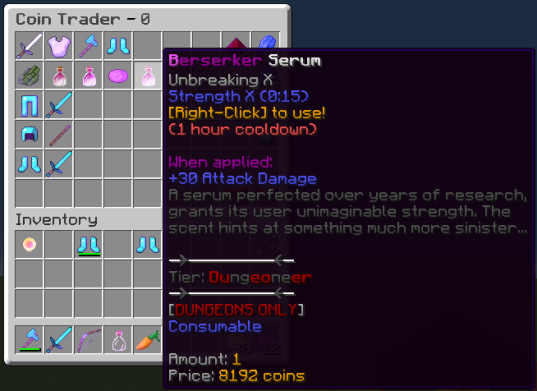 Added another new item to the Dungeons Trader that unlocks the autosort inventory permission to use within the dungeons server. Now your inventory won't look all gross!

Challenges are now handled with a simple party system, to challenge a boss, you need a party, create and manage one with these commands:

(Leaving the dungeons server leaves your party, plans are to store this) Create a party and invite members (Invited players can click the chat message to join)

Once the leader is ready, they can challenge a boss and all party members will be teleported to the arena instantly. If a leader leaves the party, the first invited will be promoted to leader

Fixed side-panel not working on the forums on mobile! You can now read your pms and see your notifications without having to go to desktop mode. The light theme will be re-added soon to work as well.

Lowered price on merch by a lot. Maestrea | Please enter your username to continue


Random Quote of the Week:

Thanks for the amazing update :3