Credit to the Build Team for the spectacular work on all new challenge boss arenas!
Enderius Arena featured above

You may be wondering, "Why did we not get last Sunday's update?" Well, two reasons. One, I went on vacation and got some rest. Two, we released so much stuff last weekend, fixed so many bugs this week, and overall had sooo much going on that we decided to just have a super awesome mega DOUBLE post this week!
For those of you celebrating Independence day this week, you could say we wanted to kick off the Summer Brawl event with a BANG (that somehow blew up last week's updates. That's reasonable, right?)

Brace yourselves, the updates are coming!
(Updates kept in order of release for clarity)

Fixed the time for rank up requirement being wrong

Fixed ranking up resetting if you logged out and back again

Fixed people being able to fly in the pvp arena

Boosters will not start when bought, instead the person who bought it can do /boosters list and /boosters activate <number> to activate it and it'll show who bought them

Lord+ now has access to /cmi shakeitoff (dismounts anyone who has used /ride on you!)

Fixed an issue with Apocalypse Tokens not dropping for withers. Instead, now there is a 5% chance for an Apocalyptic Wither to spawn, which has a 100% chance to drop the Challenge Token upon death.

Updated Soul Gem design! Use /olditems to get the new version if you have an existing one! (suggested by joey101998)

​
Fixed Insanity Ingot. Contact an Admin+ for a functioning replacement

Added /disguiseviewself (/dvs) to everyone. This gets rid of the disguise showing for you, but shows for everyone else.

Reworked the Daily Bonus rewards! (credit to shadyghost for helping make this happen)

Updated Book of Tomes to show the correct message upon redeeming

The resource and end worlds have been reset!

Added auto restart every 12 hours with a short countdown

Fixed new players being sent to a weird stone/limbo world

Added a Custom Crafter NPC accessible by anyone at /spawn

Added a flower section to /shop

Dungeons has all new bosses, quests and more! Check out the details here, with a full update log on Discord:
The Summer of the Dungeon Brawling Update PART I

[Quests] Fixed players being able to complete the D3 daily quest before even starting it.​
Fixed the Dungeon Trader so it has the same stock as Dungeons

Added Levitation Nullifier to all Horses in the Four Horses fight.

Fixed Storyteller being able to be killed by numerous custom enchants. Causing the fight to end prematurely.

Fixed some Storyteller Mini-bosses not having names above their head. (A fix for the broken disguises will come soon! We promise!)

Increased Storyteller Phase I hp (6 -> 60) and increased damage dealt to her when a story is defeated (1 -> 10). (This is mainly to help prevent strange instances in her boss fight)

Fixed numerous spelling and grammatical errors in the StoryTeller's dialogue.

Medi-Kit now removes all harmful and weakening effects when used.

Axe of Total Annihilation now deals increased damage over time (60 -> 100) and now grants Resistance II for 10 seconds when used. (Current Axes will used this Buffed version of this skill. However new copies will need to be obtained for their lore to be updated. This applies to the Bone Blaster and Heart of war as well)

Fixed Storyteller Phase I being able to be killed by Item Skills.

Fixed Issues with StoryTeller Mini-Bosses disguises. They will no longer use disguises but now have color armor.

Fixed Eternal and Boneless not redeeming again. Hopefully forever this time. (Please contact an Admin+ for an updated copy of your title!)

Fixed/Blocked off multiple areas where Story Teller mini-bosses could get themselves stuck on, rendering a fight unbeatable.

/d is now disabled in dungeons.

Added a purchasable item to the dungeon trader, that upon right clicking, unlocks access to /bottle get on dungeons

[Quests] Fixed one of the Dungeon 3 daily quests not giving any items. If you've already started this daily, you'll need to restart.

[Quests] Side quests have been fixed and re-added! Talk to Agent Kingston after you've finished Dungeon 3 to begin. Additional perks for completing this side quest coming in the very near future.

[Quests] Fixed players being able to "replay" the Storyteller side quest

[Quests] Fixed the D3 reward being the same item as the D2 reward. If you already received the reward by completing D3 Quest, message an Admin to exchange your duplicate for the proper item

The Summer of the Dungeon Brawling Update PART I

In this double feature of a Weekly Update, we'd like to pay tribute to a special player...
Yalez95

Yale recently made the decision to step down from being a dedicated staff member and one of our amazing Admins. There are few words to describe the contributions Yale has made to the server, but we still have our memories.
Yale's goodbye post: It's Been a Fun Ride Maestrea! 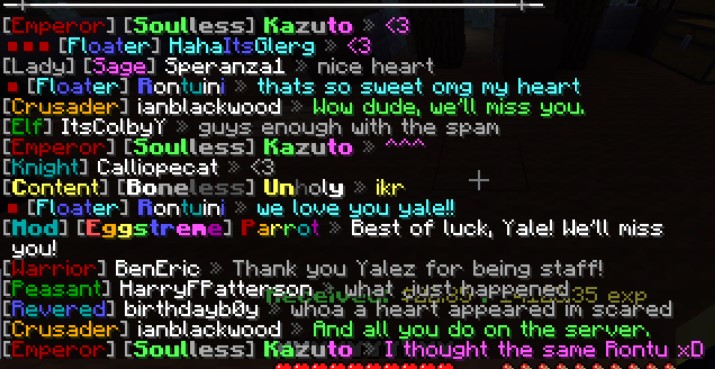 A video of ALL the messages:

Thank you for everything you've done Yale!

This week's challenge... be kind to one another.

What we're working on this week:
Mythic Mobs: Bringing an old friend back to Maestrea
Brews: Rev up those fryers! Grab the brews! Get ready to party alllll night long!
Relics: Polishing our newest inventions
QoL: Not writing a weekly update, of course.
Quests: Peering into the past
Skyblock: There's something in the distance...


Random quote of (the past) week:

This is such a heartwarming update, really made my heart swell reading those messages to Yale. <3 Good luck Yale on future endeavors, and amazing amazing update Diddly, thank you!

Woah, massive update! Love it so much Thanks Para

Big update always something new! Yaaay
Theres nothing better then Unicorns & Dinosaurs
or is there?

Amazing update like always! And the tribute to Yale is beautiful. What happened to the random quote though?
I'm a computer. That's about it.

ParadiddlePride said:
At the very bottom of the 2nd post/comment.
Click to expand...
Oh sorry, it wasn't there for me earlier.
I'm a computer. That's about it.

Wow thanks so much to everyone for all the heartfelt goodbyes! It’s been a pleasure to both serve as a staff member and play on Maestrea over the last two years! As I mentioned in my goodbye post I’ll try to hop on when I can, and I’ll continue to remain active on the forum so I can keep up to date on all the new server content. Hope to see you all soon!
Check out over 500 player and staff heads at the Maestrea Head Museum! /warp headmuseum